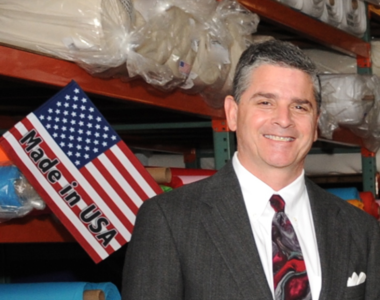 In 1902, David W. Rubright and William Grim started Rubright and Grim, a company on a small country road in Shoemakersville, Pa. that dyed and bleached cotton cloth. Grim was soon bought out, and in 1907 David S. Wolfe joined the firm which became Rubright and Wolfe. By 1913 David Wolfe became the sole owner and continued business under the trade name Globe Dye and Bleach Works.

In 1924 the old wooden structure on Ridge Road was replaced with a more modern building and new equipment. After the death of David S. Wolfe in 1935, the ownership passed to his children, mainly under the supervision of his son George Wolfe Sr.

As the business grew, new additions were added to the brick structure.

In 1947, the company was incorporated as the Wolfe Dye & Bleach Works.  The business then passed to George's three sons; Peter, George, Jr. and Philip Wolfe. Sales continued to grow with clients throughout the southern states and New England.  By the mid 1980's, both Peter and George, Jr. retired and Philip continued running the plant. In 1990 Philip's two sons, Andrew and Mark joined the company and soon began a successful partnership.

Today, Mark Wolfe continues as president of Wolfe Dye & Bleach Works.  The future looks bright with an increased emphasis for made in the USA textiles.  The company that started on the small country road in Shoemakersville, Pa. is proudly celebrating its 118th year as a leader in commission dyeing, bleaching and finishing.